With the support of  Mibac e Regione Emilia Romagna

In 2008 ILINX debuted as the first action of Homo Ludens, a choreographic project created around the four play categories of Roger Caillois: Ilinx, Alea, Agon, Mimicry.

According to the French sociologist, Ilinx is a fully individual game, a singularity condition directed at vertigo, “stomach void” and “ebrezza”.

Ten years later, the opportunity to work a re-arrangement of the piece has allowed me not only to stop on imaginative, visual and sound elements of that time to understand a possible re-actualization but, above all, has deployed an unprecedented reflection on the solitude of the performer and of his playful universe.

The status of the game is strict: fascination and adherence to the here-and-now.

In this precarious island (Caillois, again) how do we act to maintain the constant thrill of simultaneity? We take the risk: precipitating in the movement.

ILINX – don’t stop the dance tries to draw a horizon of presence for this condition, structuring a sort of ceremonial in which the actions follow each other by close seduction, not for cause-effect or propagation of meaning.

We do not regulate the accounts with memory, nor do we proceed towards the prediction of a compliant materiality.

Scrolling without passing, crossing without dwelling in the symmetry of the simulation, the reiterated attempt is to inhabit an elastic space: plasticine folded towards the vertigo. 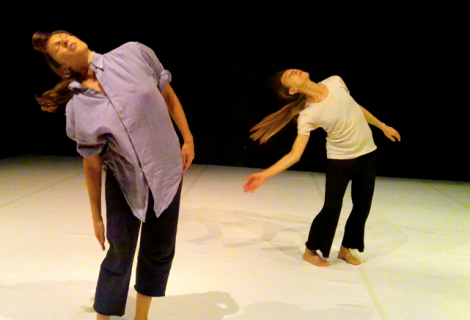