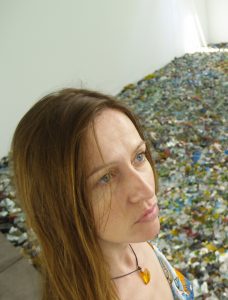 Simona Bertozzi  is a choreographer, dancer and performer based in Bologna, where she graduated in Theatre and Dance Studies at Bologna University.

Since 2005, she carries on a research in movement, composition and choreography, merging the impact of a strong physicality with theoretical references from visual arts, anthropology and philosophy.

In 2008 Bertozzi founds the Compagnia Simona Bertozzi/Nexus and starts creating works with various groups of dancers, challenging the transmission of her research and practice to adult performers but also to kids and teenagers.

In her research, choreography appears as a landscape of events, an architectural system where each movement cannot exist without the clear perception of the ambient in which it takes place. Anatomy and presence become part of a wider image, a microcosm in which nothing seems to start nor end. This topic is particularly evident in Homo Ludens (2009-2012), a four episodes project based on the ontology of game and in the latest Prometheus (2015-2016) and Anatomy (2016), both pushing forward the idea of choreography as a an ecology-epidemic system.

In 2016 the Prometheus project sees the birth of its final tableau, And it burns, burns, burns. In this work there are five characters, adults and teenagers, together to reiterate the Prometheus’ technè consideration and the know-how handing down as an unlimited practice, aimed to upset the human nature. It’s a flame that does not extinguish. And the horizon stays suspended between the possibility of falling or elevation.

In 2018 Bertozzi debuts with her new creation, Joie de vivre. Starting from the behaviours of the most ancient and common life forms of the Earth, the plants, Joie de Vivre does a choreographic research to investigate those attitudes, willingness’s, emerging behaviours that all the life forms, human being included, operate in the constant attempt to achieve a state of happiness.

In 2019 the company worked on the re-arrangement of ILINX – playing vertigo, which debuted at the Venice Biennale. ILINX, originally created in 2008, was the first action of Homo Ludens, a choreographic project created around the four play categories of Roger Caillois: Ilinx, Alea, Agon, Mimicry.

Bertozzi’s works have been shown all over Europe and abroad.

Since 2015, the company is supported by Regione Emilia Romagna and by the Italian Ministry of Culture.

– In 2007 she’s the chosen Italian choreographer selected by Aerowaves ,The Place, London.

– In 2008 with the video-dance project Terrestre-movement in still life she wins the TTV Production Award, by Riccione Festival 2008.

– In 2009 she wins, again with the video-dance project Terrestre-movement in still life, the Best Independent Work Award by Coreografo Elettronico, Naples.

– In 2012 with the work Bird’s Eye View she wins the Audience Award by Festival 17 Masdanza, International Contemporary Dance Festival of the Canary Islands.

–  Again in 2012, she was selected by the NID Platform, Platform of the New Italian Contemporary Dance, Lecce.

– In 2013 she’s one of the four selected companies in the Italian area for the Edinburgh Fringe Festival (Scotland).

– In 2017, And it burns, burns, burns is one of the final four candidate shows at the UBU prize, as the best dance project in Italy.

– In 2019 she’s selected for the Nid-New Italian Dance Platform, placed in Reggio Emilia

Simona Bertozzi’s Company works are widespread in eminent festivals and contemporary dance/theatre seasons, in Italy and abroad, as: